On the evening of 8 November, the Lithuanian Academy of Sciences hosted the ceremony of the project ‘Luminaries of Lithuania 2022’, during which even four members of the Academy were honoured with awards: Vilijandas Bagdonavičius, Vygantas Paulauskas, Mifodijus Sapagovas, and the late Adolfas Laimutis Telksnys.
The origins of the ‘Luminaries of Lithuania’ project date back to 2007, when the M. K. Čiurlionis Foundation launched the mission-programme ‘Luminaries’ to honour outstanding Lithuanians. In 2010, together with foreign ambassadors, the project ‘M. K. Čiurlionis for the World’ was launched as well. They aim to honour personalities from Lithuania and around the world for their meaningful work. Over 160 ‘Luminary’ awards have been presented to representatives of various fields during this period. 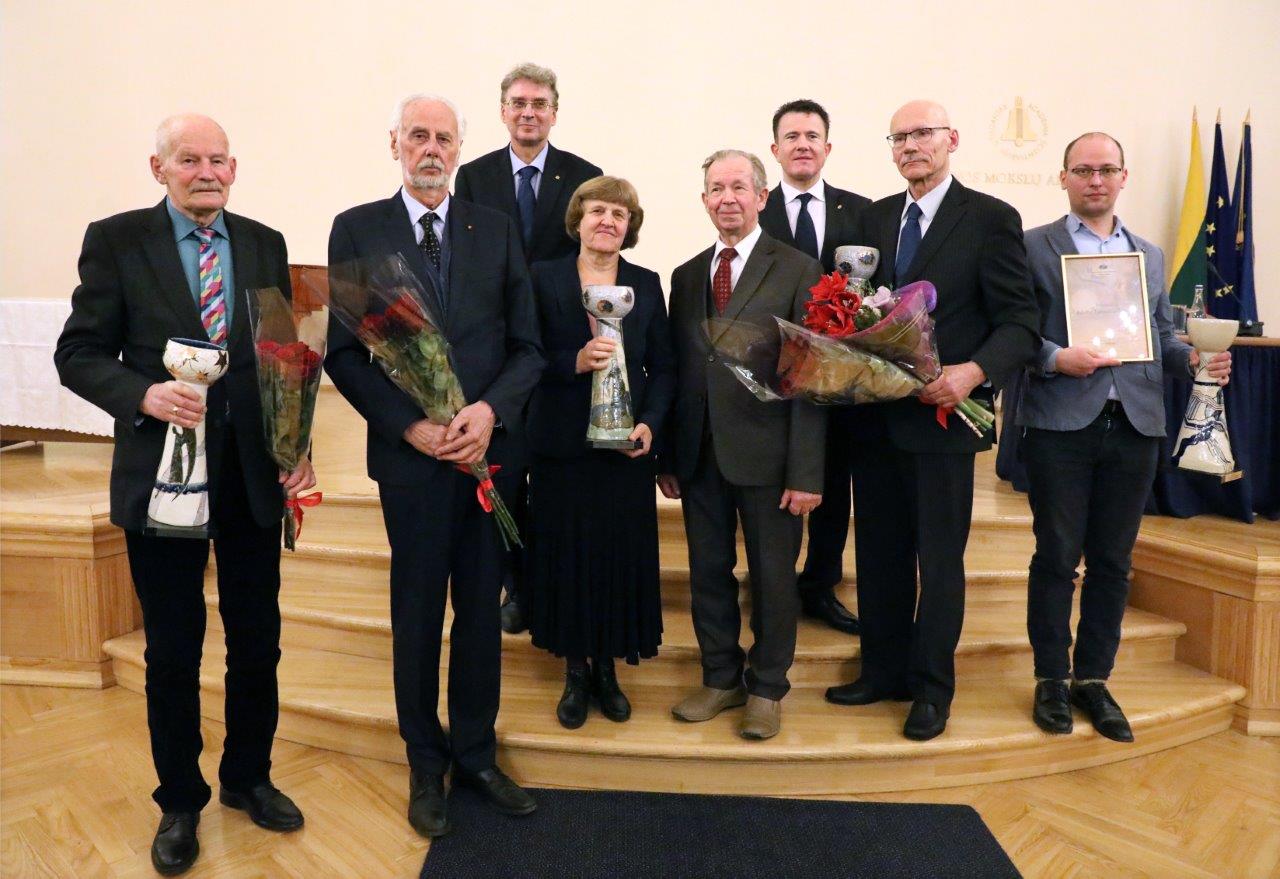 This year, for the fifteenth time, on a joint initiative of the M. K. Čiurlionis Foundation, the Lithuanian Academy of Sciences, the Faculty of Mathematics and Informatics of Vilnius University, and the Infobalt Association, the Luminary prizes were also awarded to the outstanding personalities who left a strong imprint in the field of mathematics and computer science. Along with the above-mentioned academics, the awards were bestowed on Prof. Dr Habil Šarūnas Raudys, a former member expert of the Lithuanian Academy of Sciences, and Prof. Dr Habil. Valentina Dagienė.
The audience was acquainted with professional achievements of these distinguished personalities, who then were awarded the ‘Rex’ cups of the M. K. Čiurlionis Foundation. Prof. Jūras Banys, President of the Lithuanian Academy of Sciences, and Virgilijus Dirma, Head of EU and International Relations of the Infobalt Association congratulated the luminaries and presented them with the prizes, after which the string quartet ‘Archi Quartett’ offered their musical present to the guests and participants in the event. 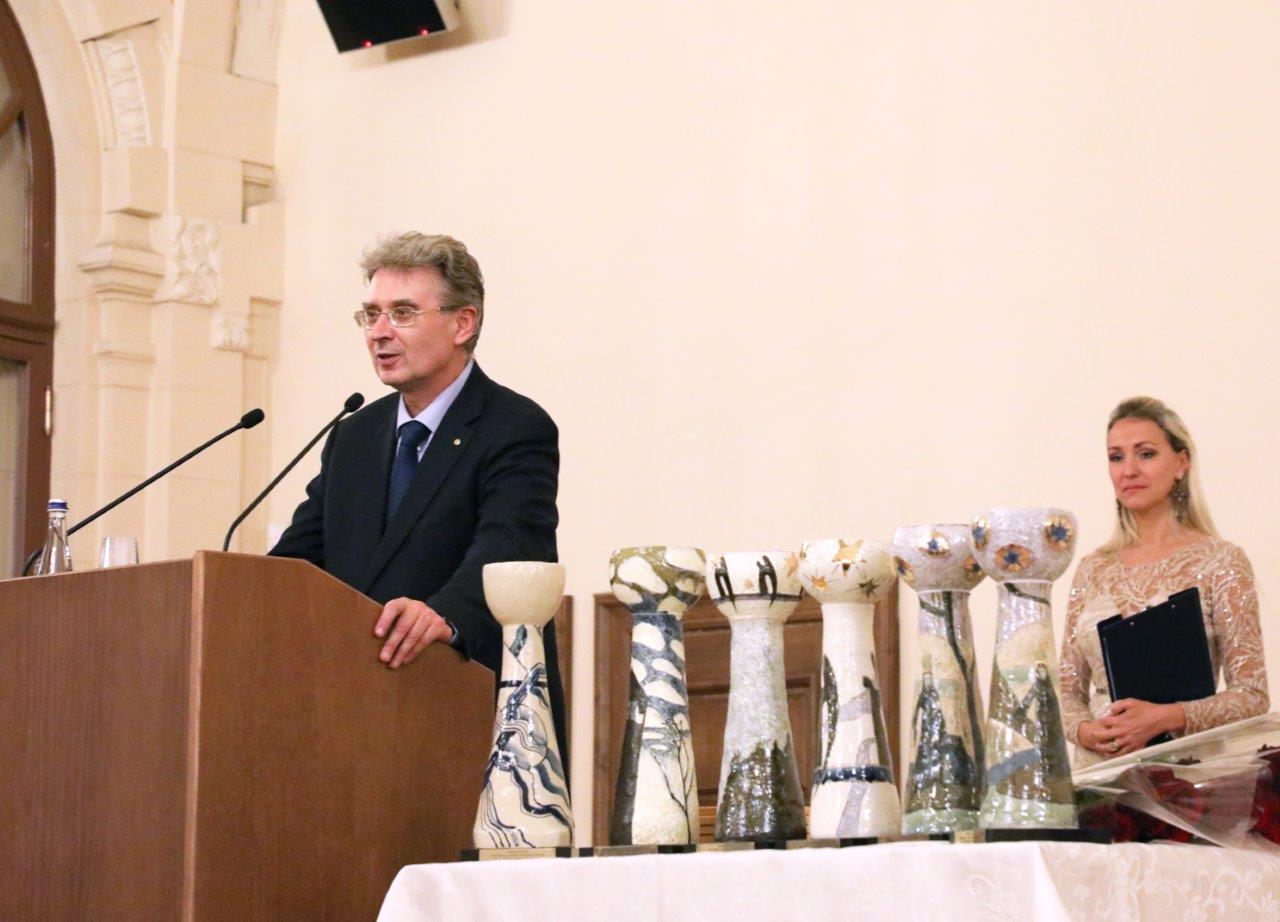 Prof. Jūras Banys, President of the Lithuanian Academy of Sciences, addresses the Luminaries of Lithuania 2022

The honoured luminaries were invited to say their words of thanks. Prof. Vilijandas Bagdonavičius spoke about the importance of science and art, mind and emotions for an individual engaged in research. Prof. Valentina Dagienė began her speech with a quote by Antoine de Saint-Exupéry, ‘We all come from childhood’. She reminisced about her childhood interests in mathematics and the works of M. K. Čiurlionis. She also stressed the importance of the role of the teacher in a person’s life. For Prof. Vygantas Paulauskas, the connection with the work of M. K. Čiurlionis was reminded by the conferences held in Kaunas and the museum of his works visited there. Prof. Šarūnas Raudys stressed the collective nature of research and said that he wanted his work to be useful to society. Prof. Mifodijus Sapagovas recalled the importance of the emergence of the computer for science, culture, and the human life. Dr Linas Aidokas, a student of Prof. A. L. Telksnys, who passed away a few weeks ago, received the award on his behalf and remembered him as a person who ‘did not rest on his laurels’ and who continued his work uninterruptedly in the face of various challenges. For A. L. Telksnys, who was a member of the Lithuanian Academy of Sciences, work was a way of life, and his ideas are to be continued in the future.
The evening was full of light and gratitude to the people who dedicated their lives to mathematics and computer science and left a remarkable imprint on the present and future generations.