The 24th European Bridging Meeting in Gastroenterology Held in Lithuania 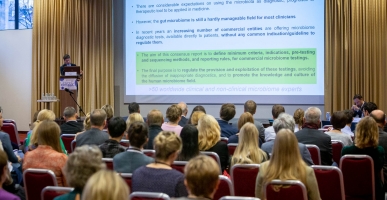 Gastroenterology is a rapidly progressing field of medical science. The European scientists working in the field of digestive diseases have a unique tradition of holding European conferences ‘European Bridging Meeting in Gastroenterology’ for young scientists. The first such conference was held in 1998 in Magdeburg (Germany); it became an annual tradition and was later held in various European countries. Prof. Peter Malfertheiner of the University of Munich and a foreign member of the Lithuanian Academy of Sciences was the initiator of these events and the organiser of the first conference. 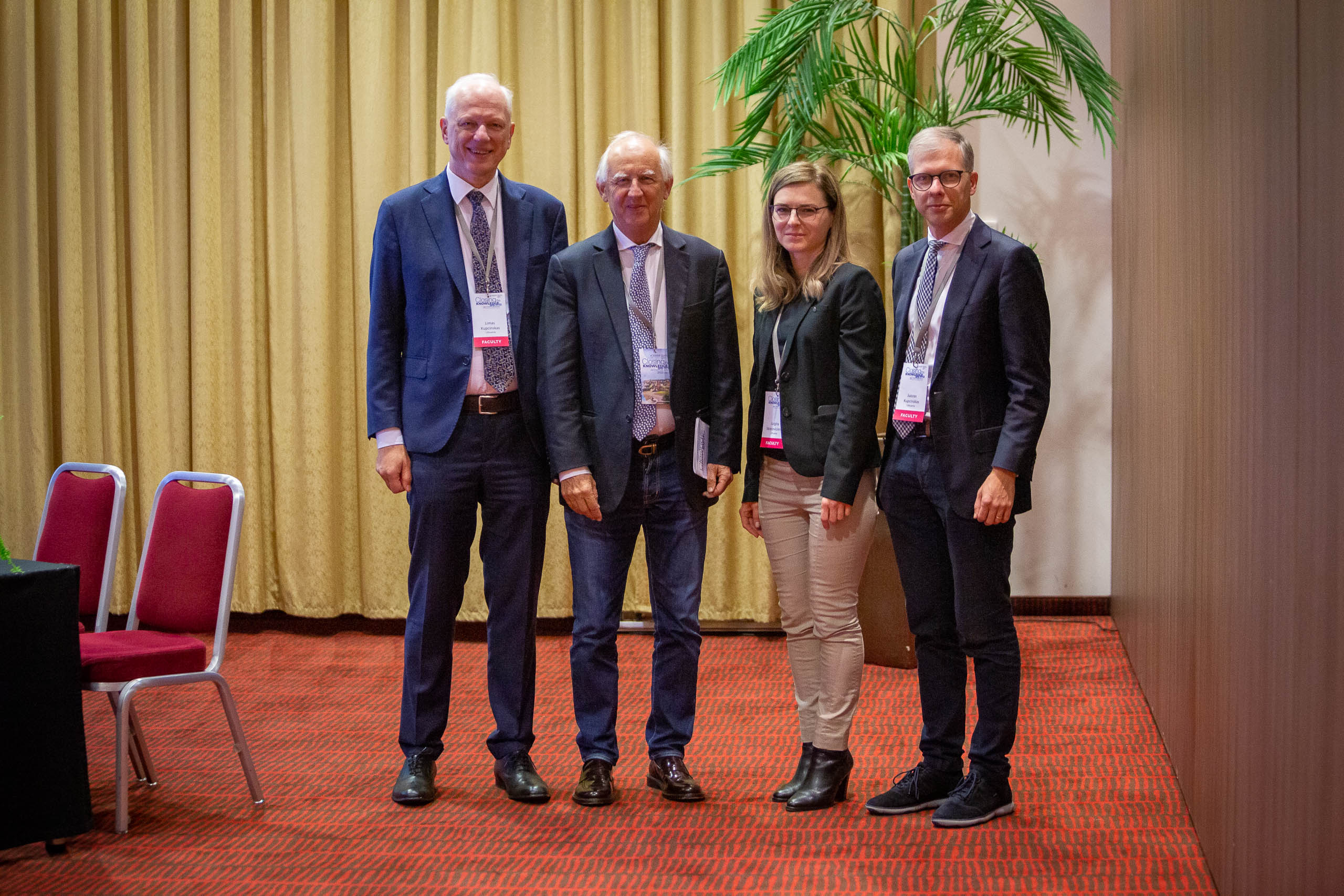 In 2006, the 6th conference was held in Lithuania, as was this very recent 24th conference, which was organized by the Lithuanian Academy of Sciences in Kaunas on 11-12 November.  Prof. Juozas Kupčinskas, who chaired the Organising Committee of the conference, is a member of the Young Academy of the Lithuanian Academy of Sciences. More than 150 participants took part in the conference, including 45 young researchers and their mentors, professors from 14 European countries (Belgium, the Netherlands, Italy, Germany, the United Kingdom, France, Sweden, Germany, Poland, Romania, Latvia, Serbia, and Croatia).

The first day of the conference was devoted to the presentations by young scientists and summarising lectures by guest speakers, and on the second day, the continuing international medical education course ‘Closing the Knowledge Gap in Gastroenterology after COVID 19 Pandemics’ was delivered to Lithuanian and foreign gastroenterologists. The conference was opened by Prof. Juozas Kupčinskas, the chair of its organising committee, Prof. Peter Malfertheiner, and Prof. Limas Kupčinskas, the chair of the Division of Biological, Medical, and Geosciences of the Lithuanian Academy of Sciences, who emphasised that after a two-year break, when the annual event was held remotely, it returned again in its traditional form and that direct communication between young and experienced European scientists would generate new scientific ideas and yield good practical results. Young scientists and famous European gastroenterologists gave 65 reports and invited lectures at this conference. Prof. Peter Malfertheiner spoke of the 6th international consensus agreement on diagnosis and treatment of the Helicobacter pylori infection; Prof. Tim Vanuytsel (University of Leuven) presented a new concept of functional diseases of the digestive tract, and Dr Jan Bornschein (Oxford University) reviewed precancerous diseases of the oesophagus. Prof. Jurgita Skiecevičienė, who is also a member of the Young Academy of the Lithuanian Academy of Sciences, delivered the state-of-the-art lecture ‘Circulated microbiome: what we know so far?’, and Prof. Juozas Kupčinskas discussed ‘Sequencing of biologics in IBD’.  Lectures by other leading European gastroenterologists and basic scientists (Prof. Gianluca Janiro (Italy), Prof. Christine Varon (France), Prof Jaroslaw Regula (Poland), Prof. Dam Dimitrascu (Romania), Prof. Hanach van Malenstain (Belgium), Prof. Aleksander Link (Germany), Prof. Marco Bruno (the Nederlands) and others also attracted avid interest of the participants. 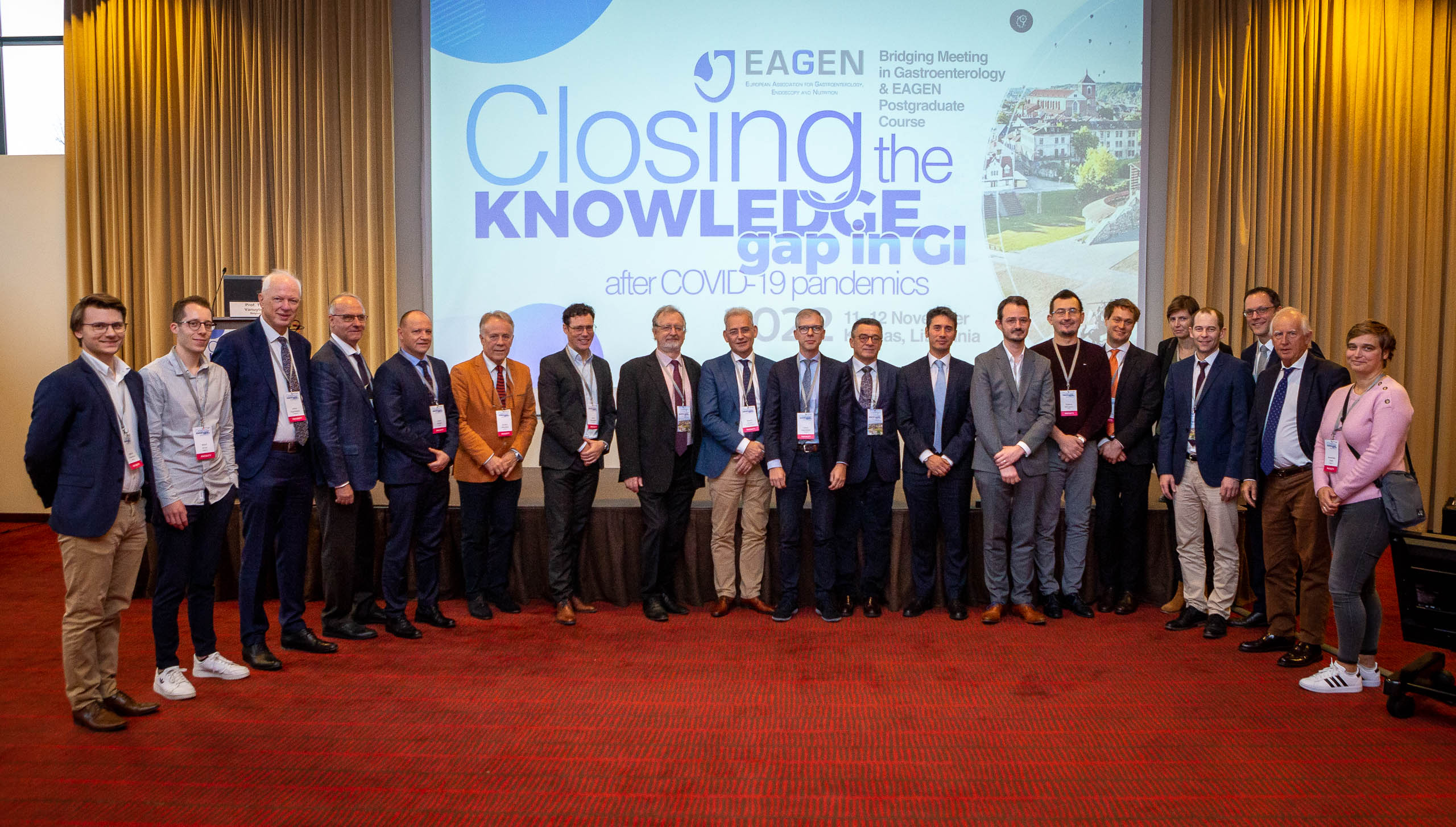 Speakers at the conference

The young scientists presented a wide spectrum of fundamental and clinical research on the disorders of the gastrointestinal tract: from stem cells, genome, transcriptome, and microbiome research to clinical studies of new drugs. Seven best presentations by young scientists from various countries (Belgium, Germany, France, Latvia, Germany) were awarded prizes; Rūta Inčiūraitė, a doctoral student from Lithuania, with her presentation ‘Changes in the microRNA profile of intestinal epithelial cells during the active inflammation phase and remission’ was among them. During the social programme, conference participants took part in the events of ‘Kaunas – European Capital of Culture 2022’. The next, 25th European Conference of Young Gastroenterologists, is scheduled to be held in Budapest, Hungary, in 2023.

Prof. Limas Kupčinskas, chair of the Division of Biological, Medical, and Geosciences of the Lithuanian Academy of Sciences
Dr Jadvyga Olechnovičienė