New Members of the Academy Elected on 12 February 2019 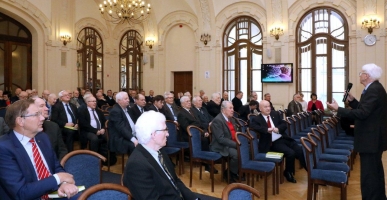 The event opened with the Academy’s presidium and members of scientific divisions extending the best birthday wishes to Vilmantė Borutaitė on her 60th anniversary and to Leonas Valkūnas, who turned 70. Lyda Milošienė, Academy’s senior secretary, was presented with a Letter of Appreciation of the President of the Lithuanian Academy of Sciences.

The board of Theodor Grotthuss Foundation of the Lithuanian Academy of Sciences resolved to award Theodor Grotthuss scholarship to the doctoral student Tadas Dambrauskas of Kaunas University of Technology. The scholarship diploma was awarded by Rimantas Ramanauskas, vice-chair of the board of the foundation. In his congratulatory word to the new scholarship holder, President Jūras Banys informed the general assembly that the Lithuanian Academy of Sciences intended to sign a cooperation agreement with the municipality of Pakruojis and seek to put up a monument to Theodor Grotthuss, the pioneer of electrochemistry, in Pakruojis region.

This was followed by the introduction of the nominees to full members of the Lithuanian Academy of Sciences by the chairs of the divisions that had nominated them. Professor Leonas Valkūnas, chair of the Division of Mathematical, Physical, and Chemical Sciences introduced Professor Gérard Mourou, who was nominated for a foreign member of the Lithuanian Academy of Sciences. The French physicist is a recipient of the 2018 Nobel Prize in Physics for the invention of chirped pulse amplification (CPA), a technique later used to create ultrashort-pulse, very high-intensity laser pulses. In the same year he was awarded the Arthur L. Schawlow Prize in Laser Science. Research laboratories of Prof. Gérard Mourou and Prof. A. P. Piskarskas entered into close cooperation in 1992, when optical parametric chirped-pulse amplification technology was discovered in the laboratory of Prof. A. P. Piskarskas at Vilnius University Laser Research Center (VULTC). In 1998, Lithuania was invited to participate in the preparatory phase of the international Extreme Light Infrastructure (ELI). With Mourou’s assistance, a preparatory project for Lithuania’s full membership in the ELI is currently carried out. VULTC launched design of the ‘Naglis’ laser complex that later became the prototype of multi-terawatt lasers manufactured by Lithuanian industry. Produced in Lithuania and based on CPA and OPCPA technologies, a laser system of this type is already functioning at an ELI complex in Hungary.
Gérard Mourou’s collaboration with Lithuanian scientists has brought noticeable socio-economic benefits to Lithuania. In addition, Mourou keeps inviting Lithuanian laser experts to various conferences to give invited presentations and consults Lithuanian researchers and doctoral students.

After the introduction of the nominees to the assembly attendees, a vote was held on entering their names on the secret ballot paper. Two vote counting commissions were formed, one for the election of full members of the Lithuanian Academy of Sciences and another for the election of the foreign member. A break for voting was announced after which congratulations were offered to Prof. Valdemaras Razumas, who was appointed vice-minister for education, research, and sports.

With the voting procedure underway, Dr. Audrius Aidietis, a professor at the Medical Faculty of Vilnius University and head of the Centre of Cardiology and Angiology at Vilnius University Hospital Santaros Klinikos, presented the paper ‘Research and New technologies for the treatment of Heart Diseases’.

At the end of the general assembly resolutions were adopted on the election of full members and of the foreign member of the Lithuanian Academy of Sciences.