Annual Assembly of the Members of the Lithuanian Academy of Sciences 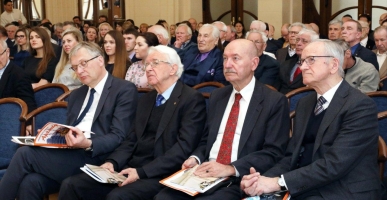 The memory of Zhores Alferov, a foreign member of the Lithuanian Academy of Sciences who passed away on 1 March, was honoured with a minute of silence.

This was followed by the presenting of certificates of prizes bearing the names of outstanding scientists and members of the Lithuanian Academy of Sciences. Based on the results of the competition for 2018, the Presidium of the Academy awarded four prizes of the Lithuanian Academy of Sciences named after prominent Lithuanian scientists and scholars. The Justinas Marcinkevičius Prize in literary studies went to the writer, essayist, and literary critic Eimutis Valentinas Sventickas for his research on Lithuanian poetry and its social and aesthetic content, and for abundant and creative published literary texts. Expressing his gratitude for the prize, E. V. Sventickas noted that his activities were running parallel to the academic environment, but there were experts who had spotted his work and appreciated it, and he found it important. He was happy to know he was the first to be awarded the Justinas Marcinkevičius Prize and invited everyone present to spend some moments with poetry by picking up and opening Justinas Marcinkevičius’s book, and in case there were some who may not have enough time for it, let them remember two lines: ‘The world is on our side. / It is us who are against us’.

The Povilas Brazdžiūnas Prize in experimental physics was awarded to Prof. Dr. Habil. Arūnas Krotkus for the cycle of works ‘Materials and equipment in ultrafast optoelectronics’. Prof. Krotkus, who is also a member of the Lithuanian Academy of Sciences, customised his thank-you speech to the Oscar protocols and rejoiced at the fact that both Povilas Brazdžiūnas and he had graduated from the same school in Panevėžys (currently, Panevėžys Juozas Balčikonis Gymnasium) and voiced his hope that he would not be the first and the last winner of the Brazdžiūnas Prize from that school.

The Tadas Ivanauskas Prize in environment protection went to Dr Ilona Jukonienė for the cycle of works ‘Briological archives as scientific and natural heritage of Lithuania’. Dr Jukonienė said that twenty-first-century environmental problems are very urgent and the legacy of Tadas Ivanauskas in this field must be connected with current works.

Audrys Antanaitis, chair of the State Commission of the Lithuanian Language, presented the commission’s annual award for correct and elegant language of a research work and rejoiced at the attention the Lithuanian language was receiving that was tangible at the gatherings at the Lithuanian Academy of Sciences. He expressed his gratitude for sincere and effective cooperation. This year, the award of the State Commission of the Lithuanian Language for correct language and elegant style went to the work ‘Verification of Matas Pretorijus’s work “Deliciae Prussicae, oder Preussische Schaubühne” in the context of Lithuanian mythology’ by Dr Žydrūnas Vičinskas of Klaipėda University. It was submitted for the competition of works by young researchers and doctoral students established by the Lithuanian Academy of Sciences.

President Jūras Banys presented The Lithuanian Academy of Sciences Activity Report for 2018, revenue and expenditure for 2018, and the draft of revenue and expenditure for 2019. Vice-president Zenonas Dabkevičius noted that the updated content of the website of the Lithuanian Academy of Sciences and the Academy itself would now be more visible to the public.

The assembly then moved on to the discussion of the report. Dr Jūratė Sprindytė, a member of the Subdivision of Humanities and Social Sciences, suggested closer relations between the subdivisions of the Academy and expressed her satisfaction at effective activities of her subdivision that resulted in 16 books in 2018. ‘A book remains, it is important to our cultural heritage because it stimulates changes in human mentality’, she pointed out. Professor Rymantas Jonas Kažys of the Subdivision of Technical Sciences expressed his wish of restoring relations with the Ministry of Education, Research, and Sport, emphasised the importance of the interaction between fundamental and applied sciences, and suggested taking the achievements in winning European projects into account when assessing institutional and individual research activities. He also suggested establishing two Lithuanian Science Prizes in the field of technological sciences. According to Professor Benediktas Juodka of the Subdivision of Biological, Medical, and Geosciences, international research cooperation of the Lithuanian Academy of Sciences should be based on the NB8 formula: three Baltic countries and five Northern countries, as it used to be during his presidency of the Lithuanian Academy of Sciences, during his term at the Seimas of the Republic of Lithuania, and as is the practice among the politicians.

The assembly continued with the ceremony of the awards to the winners of the competition of the best research works by the students in higher education and by young scientists and doctoral students. This competition is organised by the Lithuanian Academy of Sciences. Diplomas and citations were presented to the winners by Jūras Banys, President of the Lithuanian Academy of Sciences, and Valdemaras Razumas, vice-minister of education, research, and sport. On the basis of the results of the 2018 competition, the Presidium of the Academy established fourteen prizes and six citations to the students in higher education for the best research works, and eleven prizes and seven citations to young researchers and doctoral students.

Additions to the provisions of the Young Academy of the Lithuanian Academy of Sciences, presented by the vice-president of the Academy Zenonas Dabkevičius, were approved by common agreement.

At the end of the event, Valdemaras Razumas spoke about the present state and challenges of research in Lithuania. Since 2010, Lithuania had been more active than Latvia or Estonia in implementing innovations. Five research and technology valleys, the largest research infrastructure in the Baltic countries, are a proof of it. However, there still exist problems in activating open access centres, smart specialisation priorities should be reconsidered, and the salaries of scientists and researchers should be raised. The speaker attracted questions on the mergers of higher education institutions, the relations with MOSTA (Research and Higher Education Monitoring and Analysis Centre) and with the Ministry of Economy and Innovations.

A philately collection of Professor Eugenijus Ušpuras, which he started in 1994, and a large collection of artefacts of the railway postal service from the period of 1861 to 1949 were displayed in the assembly hall during the event. When presenting his collection, the nuclear physicist and collector Eugenijus Ušpuras cited Niels Bohr: ‘All science is either physics or stamp collecting’.

Information of the Organisational Department of the Lithuanian Academy of Sciences