News from the EASAC Conference in Helsinki 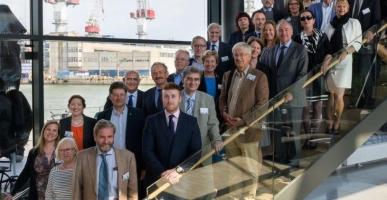 Cooperation between academies of sciences of the Baltic and the Nordic countries, climate change, research and politics – these were the central themes addressed at the conference of European Academies Science Advisory Council (EASAC) held in Helsinki, Finland, on 13–14 June 2019. Prof. Jūras Banys, President of the Lithuanian Academy of Sciences, and Prof. Zenonas Dabkevičius, Vice-President, were among 53 representatives of the academies of 20 countries.

The first part of the conference focused on the experience of the cooperation between the Baltic and the Nordic countries, the current information, and on the possibilities of further cooperation. Prof. Lars Walløe delivered his detailed overview ‘Historical Contacts between the Baltic and the Nordic Countries since 1990’ at the meeting chaired by the presidents of Lithuanian and Latvian academies of sciences, Prof. Jūras Banys and Prof. Ojars Sparitis. When the Baltic countries regained their independence, they had to restructure and modernise the system of research and higher learning, and the whole academic structure. First contacts were established with the Nordic countries: visits of both young and experienced researchers to these countries began, and first conferences were organised. Research councils of the Nordic countries assessed the condition of research and science in the Baltic countries and put forward various proposals. The state of research and science in Lithuania was assessed in 1994 by the Research Council of Norway. The restructuring of research and higher education institutions was implemented in accordance with the recommendations formulated by the experts from the Nordic countries: research institutions were amalgamated or affiliated with universities, the syllabi of higher education and research programmes were reorganised. A convention of the academies of sciences of the Baltic and Nordic countries held in Vilnius was remembered: Algirdas Brazauskas, the President of the Republic of Lithuania at the time, gave special attention to the convention by inviting its participants for a discussion and an official lunch.

Presidents and representatives of Danish, Estonian, Latvian, Norwegian, Finnish, and Swedish academies presented short reports on international cooperation; their material will be summed up and joint recommendations for the academies of the Nordic and the Baltic countries will be prepared. It was pointed out that most of the academies, the Lithuanian Academy of Sciences among them, have bilateral cooperation agreements but this is not enough. A proposal for concluding one agreement signed by seven Baltic-Nordic academies was put forward and approved.

Prof. Jūras Banys informed the conference that the Lithuanian Academy of Sciences has cooperation agreements with the academies of Norway, Finland, Estonia, and Latvia, and three academies in Sweden, but so far no agreement has been signed with the Danish Academy of Sciences. The Lithuanian Academy of Sciences has 14 foreign members from Baltic-Nordic academies, and the same number of Lithuanian academicians are foreign members in these academies; the Academy, however, does not have any foreign members from Finland and Denmark, and the academies of Denmark and Estonia have not yet invited Lithuanian academicians to be their foreign numbers. Most of the exchange visits of scientists are conducted between the Baltic countries and notably fewer of them are conducted with the Nordic countries. The president summed up cooperation experience and put forward suggestions for the enhancement and expansion of relations.  [Presentation of President Jūras Banys]

In the second part of the conference, each academy gave a short account of their recent activities in publicising science achievements and discussed organised conferences and presentations, as well as proposals submitted to politicians. President Jūras Banys spoke of the Academy’s updated website that promptly uploads information on the activities of the Lithuanian Academy of Sciences and of its members, on conferences, events, and decisions made.  Resolutions on vaccination against contagious diseases and on broader application of gene engineering in Lithuania and in Europe, which were adopted at the Academy and presented to politicians, were mentioned as an example to other academies. After hearing the academies' accounts, a proposal was put forward to further develop the dialogue between science, society, and politicians, and to engage business in it. It was accentuated that representatives of independent science should make proposals to the politicians regarding solutions to the problems in environmental protection, energy, plastic waste, transport organisation, and greenhouse gas emissions. Most importantly, scientists should not busy themselves with preparations of numerous reports, but search for a consensus in decision-making. The academies’ decisions should be known both in their own countries and, at the same time, reach the European Commission and its institutions as it has been stated that 80 per cent of legislation originates in Brussels.

Activity and significance of young academies is rising worldwide: their voice must be heard by societies and politicians. The conference welcomed the activity of the recently established Young Academy of the Lithuanian Academy of Sciences, which immediately became involved in international work and invited the members of young Baltic-Nordic academies to a forum to be held in Lithuania.

Considerable attention was paid to resolving the issues of climate change. The papers delivered at this event – ‘Climate change and human health’, ‘Environmental changes’, ‘Forest for bio-energy’, and others – emphasised that climate change is inevitable.  The implication is that only prompt and science-based rational solutions could help to buffer the negative effect of climate change on the human and environment. Academies of sciences play a powerful role in initiating and implementing scientific research, preparing studies summing up research results and proposals to the authorities, and in informing the general public about the existing situation and possible dangers.

Prof. Zenonas Dabkevičius, Vice-President of the Lithuanian Academy of Sciences