Academies of Sciences of Hamburg and Baltic Countries Expand Cooperation 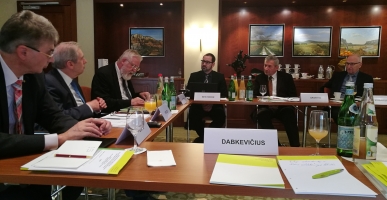 On 31 October-1 November, the representatives of the Academy of Sciences and Humanities in Hamburg that brings together outstanding scientists of North Germany, and delegations of the academies of sciences of the Baltic countries met in Hamburg. They discussed prospective spheres of cooperation between German, Estonian, Latvian, and Lithuanian scientists, the ways of enhancing the work of academies and engaging the young generation of researchers into activities of the academies. In his introductory address, Professor Edvin Kreuzer, President of the Academy of Sciences and Humanities in Hamburg, invited the participants to a discussion and noted that in many German academies of sciences, the average age of members is 60-65 years. Many countries establish young academies to involve young and active researchers in the work of academies of sciences. In 2020, the Hamburg academy also plans to establish its young academy. The participants were also invited to discuss the ways the academies should be organising their activities and cooperation in the age of technologies. This activity and its results must be observable by the public and politicians. The debate resulted in a proposal to discuss possible spheres of collaboration between the Hamburg academy and the academies of the Baltic countries.

Also, Prof. Edvin Kreuzer introduced Hamburg Institute for Advanced Study (HIAS) and pointed out that all lands of Germany have similar institutes, which are joined by an association. The state and various foundations support institutes of advanced science, while the institutes pay fees to the association, which is the umbrella organisation. The important thing is that the HIAS has established a foundation for young foreign researchers, and the scientists of the Baltic countries will be eligible to take advantage of it.

Professor Andreas K. Engel, a member of the Council of the Hamburg Academy of Sciences and Humanities, introduced the project of the Hamburg Young Academy that is to be launched in 2020. The Young Academy will have 20 members, who will be researchers with doctoral degrees working exclusively in the academic institutions of North Germany for the maximum term of three years. As the regulations of the election are currently being prepared, the Academy in Hamburg found it important to acquaint themselves with the experience of the Baltic countries in the field. Prof. Tarmo Soomere, President of the Estonian Academy of Sciences, spoke about the founding of the Estonian Young Academy, the experience of its two-year-long activity, its achievements, and some of the difficulties. In Estonia, active young researchers under 37 years of age are eligible to be elected, and their term in office lasts until they reach 41 years of age. Up to 33 members are elected.

Prof. Ojars Sparitis, President of the Latvian Academy of Sciences, emphasised that each country has a different experience. Latvia does not have a young academy, but the Association of Young Latvian Scientists is active. Many young people are engaged in the activities of the association which brings together not only researchers but also students and members with bachelor’s and master’s degrees. The Latvian Academy of Sciences does not exert much influence on the activities of the association: their interaction is based on partnership.

The discussions held during the visit addressed the possibilities of cooperation in physical and technological sciences (nano-sciences, photonics, particle physics, civil engineering), agriculture (challenges and solutions in coastal regions), medicine (gastroenterology, genetics), history and literature (history and languages of Germany and the Baltic countries; cooperation between the Baltic countries, Germany, Poland, and Russia; preservation of cultural heritage), politics and social sciences (the place of the humanities and exact sciences in the modern world, enhancement of the collaboration of politicians and researchers).

The discussions resulted in the decision to hold annual meetings of these academies, each year in another country. Thus, the next meeting will be held in Estonia in 2020, then in Latvia and Lithuania. The academies of sciences of Estonia, Latvia and Lithuania, and the Academy of Sciences and Humanities in Hamburg signed bilateral cooperation agreements. More

Vice-president of the Lithuanian Academy of Sciences