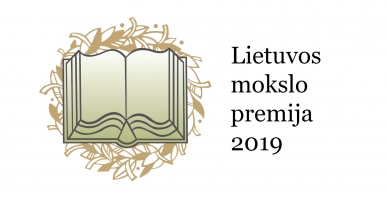 Prof. Jūras Banys, chair of the Commission for the Lithuanian Science Prizes

In the fields of humanities and social sciences, prizes were awarded to the historian Prof. Dr Rimvydas Petrauskas for his cycle of works ‘Political and Social History of the Grand Duchy of Lithuania in the Late Middle Ages’ and to the art historian Dr Tojana Račiūnaitė for the cycle of studies ‘A Miraculous Image in the Culture of the Grand Duchy of Lithuania: Studies into Church Art of the Seventeenth and Eighteenth Centuries’.

In the fields of biomedicine and agricultural sciences, prizes were awarded to Prof. Habil. Dr Giedrius Barauskas, Prof. Dr Antanas Gulbinas, and Prof. Dr Žilvinas Dambrauskas for the cycle of works ‘Investigation into Molecular Mechanisms of Pancreatic Inflammatory and Tumour Diseases. Optimisation of Diagnostic and Treatment Methods’. The second prize in this field went to Prof. Habil. Dr Vidmantas Stanys, Dr Tadeušas Šikšnianas, Dr Dalia Gelvonauskienė, and Dr Audrius Sasnauskas for the cycle of works in experimental development ‘Genetic and Biotechnological Research for the Development of Horticultural Plant Varieties’. Brief information on the laureates’ research

Dr Tojana Račiūnaitė focuses her research on the interaction of the residents of seventeenth-eighteenth-century Lithuania with miraculous holy images of the Holy Virgin Mary and constructs specific models and contexts of their experience. The scholar’s attention to the plane of authentic human experience that is the hardest to reconstruct enables attributing her research to the field of image and cultural anthropology. Dr Račiūnaitė examines various objects of seventeenth- and eighteenth-century church art heritage of the Grand Duchy of Lithuania and related phenomena of religious culture. She has discovered numerous yet unknown sources important for the theory and history of art of the Grand Duchy of Lithuania, identified and interpreted objects of church art, and unveiled their iconographic and historical contexts. Račiūnaitė’s study into the image of Lukiškės Mother of God and its worship is one of her most important applied works. The cycle of Dr Tojana Račiūnaitė’s publications of 2009–2018 expands considerably the field of contemporary Lithuanian art studies and humanities and finds its position in the international context of post-Belting art studies and modern research on cultural anthropology.

The cycle of works of Prof. Habil. Dr Audrius Dubietis, Dr Mangirdas Malinauskas, and Prof. Dr Mikas Vengris deals with integrated fundamental and applied research into interactions or femtosecond laser pulses with transparent materials. They are connected by the local effect of intense radiation on a substance the response of which changes the emitted light. The scientists discovered new nonlinear phenomena in the light–material interaction and proposed ways for characterisation and effective management of these interactions. They demonstrated innovative applications of generating broad-spectrum radiation and the shortest pulses of light, which guarantee unprecedented temporal resolution in the investigation of ultrafast processes in materials and enable control over photochemical reactions. Based on this, the scientists have developed innovative laser 3D manufacturing technologies applicable in photonics, biomedicine, and materials science.

The cycle of studies by Prof. Habil. Dr Kęstutis Kubilius and Prof. Dr Jonas Šiaulys consists of two closely related parts in which they examine various stochastic models. Stochastic models usually describe natural and social processes the outcome of which cannot be accurately predicted.  An abstract model is designed for each selected process, which maximally reflects the changes taking place in reality. The authors of the cycle addressed two groups of processes of different origin. The first group consists of processes described by stochastic differential equations. Such processes outline the changes in financial indicators over time. The second group of the processes under consideration consists of risk reversal processes that describe shifts in capital or similar values in the event of hard-to-predict random changes. The authors determined the conditions of existence of a new type of stochastic differential equations and discovered methods for estimating basic parameters of fractional diffusive processes. They developed new algorithms for calculation and evaluation of critical characteristics of risk reversal processes and investigated the impact of the flow of nonhomogeneous claims on the behaviour of risk reversal process.

The research cycle of Prof. Habil. Dr Giedrius Barauskas, Prof. Dr Antanas Gulbinas, and Prof. Dr Žilvinas Dambrauskas is the result of 15 years of the authors’ purposeful activities in the fields of molecular biology, medical, and surgical sciences. Their research has provided fundamental insights into the mechanisms of disease development, diagnostics and prognosis of outcomes, improved and expanded clinical protocols for screening, risk assessment, treatment, and perioperative care of patients with acute pancreatitis and pancreatic cancer.

The cycle of works of Prof. Habil. Dr Vidmantas Stanys, Dr Tadeušas Šikšnianas, Dr Dalia Gelvonauskienė, and Dr Audrius Sasnauskas presents genetic and biotechnological plant research that enables a better understanding of the patterns of plant functioning, development, and formation of valuable properties. The authors have developed 26 varieties of horticultural plants. In their works, the authors presented data on morphological, genetic, and biochemical polymorphism of horticultural plants, identified the markers of the examined properties that allow fast selection of plants with desirable properties. Based on molecular studies carried out with Western European researchers, the authors developed decentralised working plant collections. They demonstrated the potential of distant hybridisation for creation of target plant forms. They were first to develop distant hybrids of the black currant with higher levels of stable anthocyanins. The scientists identified new anthocyanin biosynthetic pathway genes expressed differentially in the fruits of the genera Prunus and Ribes. They also determined the regularities of low-temperature adaptation and frost resistance of plants, developed the world’s first varieties of the black currant resistant to the blackcurrant gall mite, were first to detect the proteome of the interaction of the differential nucleus of the apple tree with the pathogen Venturia inaequalis, and isolated endophytic microorganisms that reduce plant stress.

In their research, Dr Rimantas Gudaitis, Dr Šarūnas Meškinis, Prof. Habil. Dr Sigitas Tamulevičius, and Prof. Dr Tomas Tamulevičius focus on the development of high technologies and design of new materials. Their cycle presents methods of forming diamond-like carbon (DLC) amorphous films and examines the alloying of DLC coatings, their structure, and composition. The scientists gave much attention to the films with nanoparticles of precious metals and the surface plasmon resonance recorded therein. They discovered the effect of gigantic negative piezoresistance when the electrical resistance changed by a record level during deformation of the DLC film.  DLC is applied in nano-imprint lithography, for protection of optical rulers, in microprocessors and optical sensor chips in aggressive environments, and in the formation of antimicrobial surfaces. The authors have developed a capillary deposition device that allows a neat arrangement of nanoparticles on the surfaces of macroscopic dimensions. Using plasma and laser microprocessing technologies, they formed diffractive optical elements and microliquid devices, as well as solid oxide fuel microelements in yttria-stabilised zirconia coatings.

Information of the Commission for the Lithuanian Science Prizes