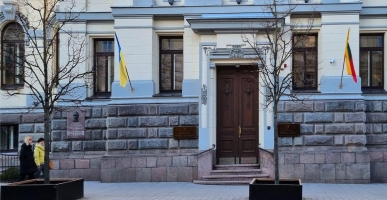 With great respect we support your ‘Open Letter of Russian scientists and Scientific Journalists against the War with Ukraine’ and, being aware of the current level of democracy in your country, we admire your determination.

Unfortunately, the reckless, insane, and terrible war against Ukraine continues with the huge military forces of the Russian Federation. Like all other actions of the Russian Federation against independent Ukraine, this invasion of an independent country has already been condemned by the entire democratic world. Ukrainians are incredibly courageous in defending their homeland and resisting the large Russian army, many of soldiers of which do not yet know or realize what they are doing. Thousands of people are dying. Ukrainian soldiers, civilians of Ukraine, who are defending their country, are dying. Your children are dying in appalling numbers.

You, academicians, scientists, and researchers of the Russian Federation, understand the danger that hangs over all mankind and, especially, over your country better than other citizens of your country; the danger that is the result of the aggressive policy and recklessness of the leader of your country, who holds the lives of a huge number of people and the threat of a nuclear catastrophe in his hands.

We, members of the Lithuanian Academy of Sciences and the entire academic community of Lithuania, implore you to urgently make every possible and impossible effort to stop the ongoing madness and recklessness before it is too late. The scale of the consequences of this madness largely depends on what is happening in your country. With hope, we look to you, educated and reasonable scientists of Russia, and to all reasonable people in Russia!

Members of the Lithuanian Academy of Sciences